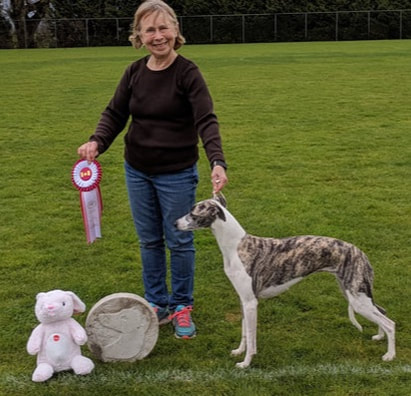 A BRIEF HISTORY OF THE BRITISH COLUMBIA WHIPPET RACING CLUB

On September 5th, 1969, a group of 24 whippet fanciers met informally at the home of Paul and Georgene Fraser to discuss the possibility of forming a club specifically dedicated to the organization and operation of whippet racing in the Greater Vancouver Fraser Valley area. At that time, most of these people belonged to The Western Gazehound Club, a sighthound group which sponsored whippet racing but was primarily involved in hosting specialty shows for the various sighthound breeds. Those in attendance at the meeting unanimously agreed that the time was right for the formation of a whippet racing club and so on January 9th, 1970, the first meeting of the British Columbia Whippet Racing Club was held at the home of Dr. John Lawder and Mrs. Marion Lawder. The Clubʼs first Executive was made up of:
President – William Turpin Sr.
Treasurer – Derek Russell
Vice – President – Dr. John Lawder
Racing Secretary – William Turpin Jr.
Secretary – Mrs. Jerry MacLurg
In order for the club to be able to host a race meet in its first year of operation, a great deal of hard work and mechanical expertise was needed to produce a starting box, a trailer on which to haul the starting box and a lure machine. While many of the club members devoted considerable time to the labour of this undertaking, the bulk of this labour and the mechanical skills required to construct the starting box and the trailer were supplied by John Rogalsky, one of the clubʼs hardest workers during it's early years. The lure machine was built by Robert Watson at the BC Institute Of Technology.
The Club held its first NPR Meet under the auspices of the American Whippet Club on May 31st, 1970, at UBCʼs Wolfson Fields. Twenty seven adults and ten puppies competed in this event with Paul and Georgene Fraserʼs CH Emberson Of Course ARM winning the meet undefeated. Doris Ringerʼs CH Bardon Faded Finery was High Score Best Opposite Sex while Gale Lyttleʼs Sonnyside-Up Of Course finished as the top puppy for the day.
Over the years, the race sites used by the BCWRC to host NPR, NOTRA and NAWRA Meets have shifted for a variety of reasons, but good memories will always be conjured up by these race sites: UBC, Ambleside Park in West Vancouver, Burnabyʼs Central Park and Burnaby Lake Sports Complex, Abbotsfordʼs McMillan Field, Exhbition Park and Upper Sumas Elementatary School and Brennan Field in Squamish.
Through the efforts of Willim Turpin Sr. and Wiliam Turpin Jr. several changes were introduced to whippet racing in North America which still find favour today: The BCWRC was the first club to host a double – header race weekend, The NPRʼs scoring system was changed to eliminate the problem created by the inequities of the High Point scoring in the second pogram and “the loop in the line” was introduced to assist the starting box operator.
When The Club was first formed, two unwritten guidelines were followed in planning and running club activities: develop an atmosphere of good sportsmanship and camaraderie amongst all whippet owners who attended Club events and provide the fairest running conditions for whippets competing in race meets hosted by the BCWRC. Today, these guidelines still prevail in club activities.
​
Wiliam Turpin (Jr.)